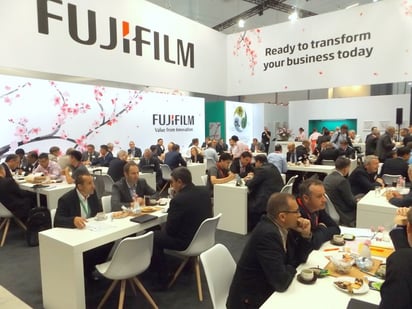 Fujifilm’s influence was felt at several levels—particularly concerning inkjet—during the international graphic technology trade fair known as the “Olympics” for print and allied media—drupa2016 in Düsseldorf, Germany, in June.

The reach of inkjet was apparent all over drupa, but scratch the surface and it will probably reveal the involvement of Fujifilm Inkjet Technology. The largest aqueous ink production facility in the world is Fujifilm’s facility in New Castle, Del., where aqueous, pigmented and dye inks are manufactured. Research and development is conducted in Scotland, and also in Japan. One notable result is the RAPIC (Rapid Coagulation, without dot bleed) ink primer used in the Heidelberg PrimeFire digital inkjet press, co-developed with Fujifilm. RAPIC coating enables inks where water to be used as the dispersant but, as the inks coagulate quickly on the primed substrate, normal coated offset stocks can be printed. Sharpness, colour vibrancy and detail are superior to other methods.

Equally, UV inks made in the UK by Fujifilm Specialty Inks were in use in many UV wide format presses around the show; printheads, too, from Fujifilm Dimatix. Many OEM customers deploy this technology as well as Fujifilm itself, such as Heidelberg, Inca and others.

There were several new product releases and perhaps one of the most notable was the announcement of a next-generation 540mm wide digital web press for flexible packaging. Using LED-UV curing, the new press also features EUCON (Enhanced Under Coating and Nitrogen purge)—enabling printing on non-porous filmic substrates and odourless results for food-grade packaging. Able to print up to 50 linear metres per minute, the new press is ideal for short and variable runs of high-grade flexible packaging and, unlike other systems, fully supports heat-sealing and high-temperature sterilization of pouches.

Initially available in Japan where one is operating at Kinyosha Printing, the as-yet-unnamed LED-UV press will be further developed for global markets.

Packaging with digital was a prominent feature of Fujifilm’s drupa stand—also, on Heidelberg’s stand where the PrimeFire 106 B1 size, co-developed with Fujifilm was seen for the first time. Using many of the successful features of Fujifilm’s B2 digital inkjet press, the Jetpress 720S, the PrimeFire 106 is targeted at short-run folding cartons and heavier stocks and capable of up to 4,500 B1 sheets per hour, using Fujifilm Dimatix Samba printheads and Vividia RAPIC ink system.

Speaking of the Jetpress 720S, several new orders were announced at drupa, making this machine the most popular B2 digital inkjet press in the world, at well over 70 installations. Improvements shown at drupa2016 include greater substrate versatility and a new GUI together with iPad®* remote operation. Jetpress 720 presses went to Germany’s CEWE for photobook production, the UK’s Emmerson Press; two for Germany’s posterXXL and another to 130-year-old Straub Druck + Medien for web-to-print work.

The spread of inkjet technology was awesome at drupa, nowhere more than on the Fujifilm stand. Applications of this remarkable digital method were to be seen in every corner, from soft furnishings to fashion fabrics, wallpapers and ceramic tiles, corrugated cartons to flexible packaging and of course the customary general commercial sheet and book sector.

As Fujifilm Senior Director of Business Development at Fujifilm Dimatix, Bailey Smith noted, “Our Samba printheads are now full silicon MEMS technology with Versadrop and we can demonstrate them operating at up to 300 metres per minute.” He also mentioned a new jettable metallic ink to go along with CMYK, enabling many shades and hues of metallic printing.

From Robots to Reader

Another new application was 5D printing in partnership with robotics specialist EPAC. Aimed at the on-demand book market, 5D solution features an offset-quality Fujifilm Jetpress 540W continuous feed inkjet press, with EPAC automation at the end so the book order—as little as a single copy—goes “from robot to reader.” When an order is received over the internet, it is processed and queued, sent to the Jetpress 540, collated, trimmed, bound and finished using EPAC’s E2 system, then stacked or made ready for delivery—all without human intervention. The cost reductions alone are considerable.

But much attention was also on two new roll/hybrid machines, including the Uvistar 320 Hybrid roll/flatbed machine at 3.2 metres wide and featuring Dimatix Q-class printheads for true greyscale colour reproduction. Capable of up to 195 sqm/hr, it features 8 ink channels plus a ninth option for white ink.

The second new super wide printer was from the Acuity family, the 3.2 metre LED 3200R LED-UV which as the name implies, features low-energy LED-UV curing of compatible inks—just like the immensely popular 1.6 meter Acuity LED 1600. It can print up to 110 sqm/hr and has 8 ink channels including white and a clear overcoat for high gloss spot varnish effects.

While most of the excitement surrounded Fujifilm inkjet technology, the company by no means ignored commercial offset and workflow, with demonstrations of XMF workflow innovations in plenty and the resource-saving SUPERIA range of plates and chemistry, including the all-new Superia ZD processless plate, now available in B1 as well as B2 sizes. A new super-fast B1 CtP device, the 8900Z capable of over 70 B1 plates per hour was also featured.

It can be said that Fujifilm’s presence at drupa2016 was a “show within a show”—such was the diversity and variety of solutions for graphic reproduction of all kinds. No wonder it was hard to get close to some of the demonstrations and personnel, it was so popular.

*iPad® is a trademark of Apple Inc, registered in the US and other countries