Learning About Printing By the Book

Most people outside of the printing and graphic arts industry learn about our industry from books. The incredible range and scope of all other things printed, from wallpaper to solar panels, is hidden behind the veil of text and images on paper, bound into a series of page sections and covered in either soft or hard materials.

The “book” as we know it — flippable pages bound together — began in the first century A.D. as the Codex, from the Latin caudex, meaning block of wood. Before that, the Romans and Greeks, Persians and Egyptians before them used scrolls. By the third century there were as many codex publications as there were scrolls and by the sixth century, the handy, robust codex format had replaced scrolls almost entirely (except for ceremonial occasions).

Of course, until the invention of printing, all codices were hand-written and illustrated. They were very widespread — even the Mayans and Aztecs had them. Many were produced on flattened vellum, or animal skin. Scribes could use both sides of the sheets and pack more information into a smaller space. Compare this with modern day computer storage — from a few hundred kilobytes to many terabytes and even petabytes in half a lifetime.

When moveable type printing came along in the 15th century (eighth in Korea and China), the codex format — now called “book” from the Germanic boc — still meaning “wood” — was perfect to house the mass production of printed pages. That they were called books is ironic as in those days there was no wood in them at all — paper was mostly made from cloth fibres or flax and the covers were either tooled leather or vellum. It wasn’t until the 19th century that wood became widely used in papermaking.

Without doubt, historians agree that books changed the world. Literacy, once the domain of the churches, rich and aristocracy, spread like wildfire and more people became informed as primarily oral societies gave way to literate ones.

eBooks on the wane

It may come as a shock and surprise to many that the much-vaunted eBook phenomenon has stagnated or is actually in decline. The British book chain Waterstone’s has actually ceased stocking Kindle e-readers, in many of its stores due to what it describes as “pitiful sales.”

The book industry’s leading data research firm, Nielsen Bookscan found that, in 2015, sales of printed books actually increased by 2.8% over 2014, following a further 2.4% increase in 2014 over 2013 sales. Depending on what part of the world you live in, printed books still account for between 70% and 85% of the market.

What is causing this uncharacteristic decline in an online, screen-based sector? The answer can be found deep inside the psychology of literacy and reading and the ancient Greeks knew it.

Books are part of our culture 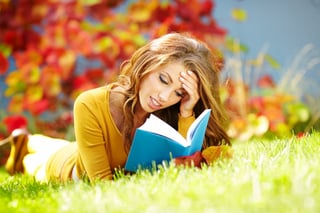 Haptikos is a Greek word meaning ”to come into contact with” — a sense of touch or connection. From this we get the word haptic — beloved of pediatricians who advocate as much mother-baby contact as possible as this helps the baby develop and build confidence like nothing else.

Haptic has also come into vogue from academics describing the positive nature of printed items in contrast with screen-only information. One of the world’s foremost authorities on haptics as applied to print and reading is Anne Manger of Norway’s Stavanger University. Briefly, she finds that:

“Whereas print is tangible, fixed and imprinted on a physical substrate, digital is intangible, with the content and storage medium separated, and with a temporary visible display that is unstable; elements that could play a crucial role for children when they are beginning to learn how to read. In this way different relationships emerge between something that is printed and something that is digital, and it becomes necessary to ask how the intangibility of the text impacts reading on different levels, different kinds of text, and for different reading purposes.”

Manger’s research and findings are typically academic and for those who want to know the deep truth it can be found here.

Put simply, we enjoy and learn more when we read from paper.

Delivering books, one at a time

Until recently, the main problem for publishers of printed books was that they had to print and distribute about twice as many copies as were actually sold, the remainder being either sold off cheaply or re-pulped. It was an impossible business model to continue in a digital online world.

Enter digital printing and companies such as Ingram’s Lightning Source which can receive an order for a book before it is printed, print one copy, pack and send it all within a few hours. When this happens thousands of times an hour, you have a better business model. Indeed, the developer of the Kindle, Amazon, is one of Lighting Source’s largest customers. People worldwide are proving that they prefer their books in print.

Fujifilm has been at the forefront of developing on-demand, zero-waste book printing stems such as its “5D” program with robotics company EPAC. In 2016, Fujifilm and EPAC established initial production systems in the United States, Europe and Latin America that incorporate JetPress and EPAC’s E2 technology, including a new ink. The partnership brings to the commercial print market the ultimate short run, full-automation, zero-waste printing system with quality comparable to offset. Sasha Dobrovolsky, CEO of EPAC Technology, states, “Fujifilm R&D and the combination of the two companies’ technologies will bring solutions that people can only dream of today.” The initiative has now been extended to include the Fujifilm 540W web press for higher productivity.

There will always be a place for e-readers such as Kindle; the portability and storage are major assets. However, for information retention and overall “haptic” experience, there is no substitute for a printed book.

Some may recall the success of the raunchy series 50 Shades of Gray by E.L. James. It began in 2011 as an eBook only. Once Vintage Books had acquired rights, by 2015 it had sold in excess of 125 million printed copies.

Perhaps turning the pages of a good potboiler is just more “sensual!”