Curing inks and coatings using ultraviolet light energy has been deployed in the printing, signage and packaging industries for some time now and offer identifiable advantages in production. Inks can cure on the press and printed sheets can be ready for finishing immediately, instead of waiting for evaporative drying or partial infrared drying. UV curing of adhesives is even used in medicine—you may have had a tooth cap cured by using a UV light probe.

In signage and display, an increasing number of roll-to-roll and almost all flatbed printers use UV curing. In packaging and label production, attractive spot-UV varnishes can be applied for high-gloss embellishments. Led-UV drying and curing speeds up production, enabling sheets and reels to be die-cut, creased, further embellished or otherwise handled right after printing without risk of smudging or set-off onto the next sheet.

UV curing is not just a new light source—it’s a system that requires inks precisely matched to the energy levels of the UV source, and shuttering apparatus to make sure the UV ink cures on the paper, board or film and not inside the printing device. In offset and flexo, printing plates must be capable of handling UV, particularly where photopolymers are incorporated since UV curing is itself a polymerization process. Fujifilm’s FleneX photopolymer flexo plates are already UV cure-tolerant.

The big “but” in UV curing is that there is no plain vanilla UV. UV light is invisible to humans—if you can see it it’s because visible light is added so you know when it’s on or off. UV rays can be harmful to skin and eyes. The UV “black light” often used in discos and stage shows causes white objects, such as teeth, to fluoresce.

On the electromagnetic spectrum, UV covers wavelengths of around 10 nm (nanometers) to 400nm, above which we can “see” the light, such as with the 405nm lasers used for Violet printing plates such as Fujifilm’s Superia LP-NV2 and Ecomaxx visible light systems. For ink and coating curing, wavelengths of 220nm to 400nm are typically used.

To generate enough UV energy to cure (polymerize) the special UV inks and coatings, mercury arc vapour has long been the mainstay source. As the mercury inside the lamp vaporizes by passing a high-voltage electrical current through, it emits a broad spectrum of UV energy, typically with a “spike” of one wavelength. Adding other elements to the mercury, such as iron and gallium, changes the spike wavelength and the lamp can be “tuned” for specific applications such as clear coating, pigment inks or white base coats.

The problem with mercury arc vapour lamps is that they consume a lot of power, don’t last very long and are so high energy that great care must be taken when using them. They emit ozone and often have heat IR wavelength added to speed up drying, which can warp and damage heat-sensitive substrates. Disposal of used lamps is also problematical, since mercury is a toxic metal—and this has attracted the attention of environmental regulators.

However, mercury arc UV lamps perform a very efficient curing function for the time being; as with all technology shifts, it may take a few years to phase them out completely. 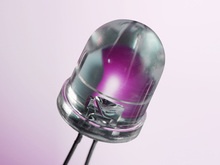 Light-emitting diodes may have been around since the 1960s but they were incandescent or at the red end of the spectrum. Remember the old red LED hand-held calculators? As research and development advanced, LEDs became capable of blue, then white and now UV light energy emitting. The technology was extremely complex, so much so that in 2014, three Japanese physicists—Isamu Akasaki, Hiroshi Amano and Shuji Nakamura—were jointly awarded the Nobel Prize for physics for developing the blue LED.

Today, LED-UV curing is moving ahead in leaps and bounds with companies such as Air Motion Systems and Phoseon, finding markets in all printing applications. The advantages are many:

Fujifilm is a longstanding advocate of LED-UV curing for all of the above reasons. The latest addition to the LED-UV wide-format printer range is the Acuity LED 3200R—a 3.2 metre wide “big brother” to the hugely successful LED 1600 II 1.6 metre model. The eight-channel Acuity 3200R with clear and white ink, capable of up to 110 sqm/hr production, is a welcome addition to any sign and display shop wanting a cleaner, safer and more productive environment.

Some applications still require the high-power of mercury arc UV curing but there can be no doubt that LED will ultimately take over. The October 2016 Inkjet & Chemistry conference in Düsseldorf, Germany, has several sessions on LED-UV inks and curing, including participation by Fujifilm executives.

In digital inkjet label presses, we can see ‘hybrid’ curing where LED is used to “pin” the ink to the substrate, while mercury arc is used for the final blast of UV energy to harden the inks and coatings.

With LED-UV technology said to be doubling in power about every 36 months, it is apparent we are witnessing the demise of mercury arc and the ascendancy of this new, more environmentally friendly approach.

The good news is that far from being an expense, Fujifilm makes it a cost-reducing investment with longer life, less electricity, greatly reduced atmospheric emissions and a healthier planet!

The UV-end of the spectrum is just beyond Violet at 400nm and not visible to most humans, although its effects are very powerful.