Newspapers: Will They Survive? 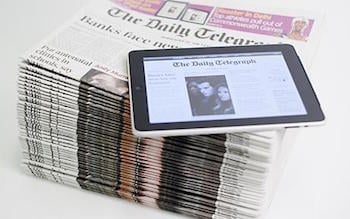 They’ve made and broken governments, built and destroyed reputations, informed, entertained, advised and debated for over 200 years. They’ve even lined the bottom of parrot cages and wrapped up fish and chips. When they’re done, they can be recycled several times into more newsprint, egg cartons or packaging. We’re talking about newspapers, and how they are faring in a fast-changing digital world of communications.

It seems ironic that Australia’s ABC News, every morning, features a “what’s in the papers” section where front pages are held up to camera and headlines discussed. This is perhaps a clue to why newspapers are still in demand—authoritative journalism and editing. Newspaper websites remain widely read worldwide, with established newspapers such as The New York Times, The Daily Mail, Wall Street Journal and Guardian all in the top 10 alongside digital sites such as Huffington Post, Yahoo! And, of course, Google News.

But newspaper printing circulations are declining, while digital versions of newspapers are increasing. The old model of advertising subsidizing both good journalism and the cover price is rapidly dying. According to global newspaper body WAN-IFRA; in 2014, newspapers globally made more revenue from the cover price than from advertising (USD$92 billion vs. $87 billion).

Digital mobile/tablet/PC versions of newspapers are increasing their paid-for circulation as well as advertising revenues. By 2019, according to a PwC survey, digital’s share on newspaper industry advertising will have increased to 43.3% from 20.7% in 2014, while the printed paper version’s share will decline to 56.7% from 79.3% in 2014. 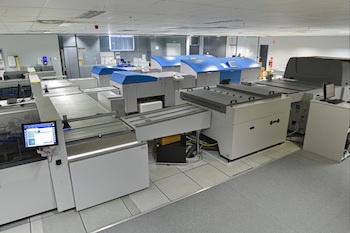 News is now both ink and digital

When combining a newspaper’s two publishing platforms—print and digital—the outlook is much brighter, if not exactly “rosy.” However, a weakness of digital news consumption is that readers find advertising intrusive, especially pop-ups, and ad-blocker software use is on the increase. Nevertheless, newspapers’ legacy of quality journalism and investigation is standing them in good stead for a gradual shift to digital platforms and, as digital advertising revenue increases, they are more able to subsidize journalism from the proceeds.

There is a loyal readership for printed newspapers—mostly baby boomers. As this demographic shrinks, circulations also dwindle and we are seeing consolidation of printing sites with several titles being printed under one roof. Some newspapers are doing better than others; generally News Corp. titles are declining at a lower rate than Fairfax titles, while ARN (Australian Regional Newspapers) have quit print altogether and sold their titles to News Corp.

Printed newspapers seem to be heading for a future of lower share of advertising revenue, lower circulations but paid for at higher cover prices, and more of a “luxury” purchase to more affluent, time-rich and educated consumers who trust the content. “News” as such is becoming less important than analysis, opinion, investigation and entertainment. One area where newspapers are doing well is the glossy colour magazine inserts, for example. Perhaps they should think about becoming magazines with a news insert rather than newspapers with a magazine insert! 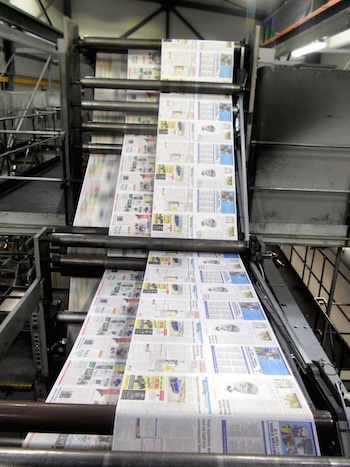 For many, the sheer relaxation and tranquility of sitting down with coffee in hand to browse a weekend edition of a newspaper is irreplaceable. For others, a screaming headline might be the spur to make an impulse buy of a paper from a news agency or supermarket.

A thundering great newspaper press and delivery system is still a sight to behold and we will have printed newspapers for many years to come. In this, Fujifilm is playing a leading role with plate supply, chemistry, CtP platemaking and colour management. In Australia, over 76% of newspaper is recycled—one of the highest statistics in the world. Fujifilm contributes to environmental credentials by providing a minimum-chemistry-use plateroom with added reductions in power and water usage.

As a whole, media organizations are set for a good future, with digital playing a gradually increasing role. For now, printed newspapers still represent over half of revenues when circulation and advertising are combined. In some markets such as India and China, newspapers are still the main source of daily information for billions of people.

Wherever news media is heading, Fujifilm will be there along the way to help with the changes.

In the meantime, and for many years ahead, enjoy printed newspapers for what they are, authoritative, influential, recyclable, entertaining—and even a place where you can have your own say!