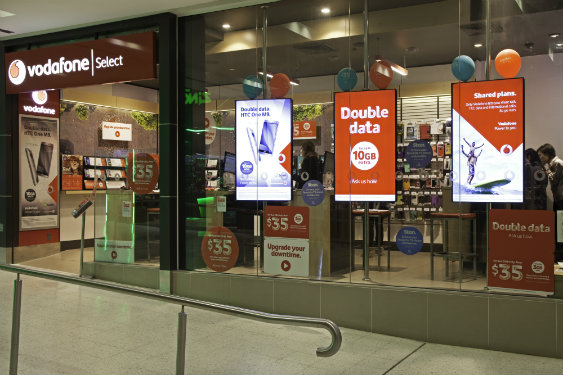 The Fujivision digital signage solution developed exclusively by Fujifilm Australia for mobile network operator Vodafone is completely unique to any other solution worldwide.

The cloud-based solution which integrates Samsung commercial large format display (LFD) panels with built-in WiFi (commonly known as System on a Chip or SoC) and is powered by Signagelive (for which Fujifilm Australia is an integrator and preferred reseller) for content distribution was implemented to reduce Vodafone’s dependency on, and the cost of printed point-of-sale material for promotional activities and to move them to digital content delivery in store.

Fujifilm Australia Technology Manager Craig Rumsey explained, “Fujifilm Australia 100% designed and now supports Vodafone Australia’s digital signage networks as a complete end to end solution. The initial installation was into one hundred stores in only twelve weeks. We have now installed a nationwide network of more than 900 displays with many more screens still to be installed.”

By using Signagelive for content distribution the content is played through the Samsung LFD panels, thus not requiring an external media player. All that’s required in store is an Internet connection. Each panel is an end point and licences to the Fujivision solution and support are sold per panel. Once the panel is installed it connects to the Signagelive server via Vodafone’s 4G network and the content, previously uploaded by Vodafone, is immediately downloaded to the panel. The screens automatically check for new playlists and different playlists can be scheduled to run at any time.

Rumsey continued, “This Fujivision solution truly encapsulates Fujifilm Australia’s core competencies of providing a full cloud-based service with comprehensive support. Many of these competencies have been refined from our success developing and implementing the Imagine photo imaging platform.”

Vodafone now has the complete freedom and flexibility of a centralised facility to run its countrywide digital signage network as all content is managed at Vodafone HQ with the in-house team able to log in via a simple web portal. Content can be created, scheduled and managed on a local, regional or national basis, even down to “tagging” individual panels depending on requirements. This way Vodafone can run different messages on different panels based on their location in the store and tailor campaigns in a far more effective and targeted way than ever before. The system also allows campaigns to be run based on individual events such as sporting matches or seasons. The control over priorities and content is at Vodafone’s fingertips in realtime.

One of the main reasons Fujifilm Australia won this prestigious contract was its proven experience in retail digital networks and its ability to demonstrate full, comprehensive and ongoing support.

Craig Rumsey added, “For each Vodafone store we take care of the entire solution including implementation, customisation, servicing, monitoring and maintenance. This way Vodafone are 100% guaranteed that each panel installed will be working as soon as they turn the power on. By provisioning this Fujivision solution for Vodafone Fujifilm Australia can also closely monitor any issues with our comprehensive network management system. This often means we are able to alert Vodafone HQ or an individual store about an issue before they have had a chance to witness it for themselves. We then fix the issue and service is resumed as quickly as possible.”

With this unique solution Fujifilm Australia have also demonstrated how astute market insight combined with experience and the integration of core competencies can significantly create new opportunities and increase sales.

Craig Rumsey concluded, “In truth Fujifilm Australia won this project on experience, trust and the belief from the customer that we understand retailing. With that in mind every panel is positioned uniquely in-store to maximise its effectiveness. We identified a market requirement, found a signage solution, developed it and implemented it. Now with this proven system in place and expanding rapidly across Australia many other similar Fujivision digital signage solutions are in the pipeline.”