North America, 23 August 2012. In recognition of its innovative design and function, the Fujifilm Jet Press 720 has earned a 2012 InterTech™ Technology Award from Printing Industries of America.  Fujifilm will receive one of twelve awards all bestowed on technologies that were deemed truly innovative and are expected to have a major impact on the graphic communications industry. This is the fifth InterTech Technology Award for Fujifilm, and the announcement follows the first North American installations of the Jet Press 720 at Gilson Graphics in Michigan and Digital Edge in Canada.

“It is an honour for Fujifilm to be recognised for its innovative technology by Printing Industries of America for the fifth time,” said Todd Zimmerman, vice president and general manager, FUJIFILM North America Corporation, Graphic Systems Division. “The Jet Press 720 is a revolutionary product for the industry that also serves as a cornerstone within the Fujifilm Inkjet product portfolio.  We are very excited about offering another inkjet printing solution to meet the demands of the most discriminating print buyer and simultaneously integrate into a commercial printing operation.  We are especially proud of this breakthrough in inkjet technology.”

"Our judges were all impressed with the quality of the prints produced from the Jet Press 720 and with the range of substrates that could be used with it," said Dr. Mark Bohan, vice president, Technology and Research, Printing Industries of America. "It is a great solution for very short to medium run printing, where much of the industry's focus is these days. The Jet Press 720 provides a great solution to the challenges printers are currently facing."

The Jet Press 720 is the first B2 sheet-fed inkjet press capable of producing offset quality. The Jet Press 720 uses FUJIFILM Dimatix SAMBA™ print heads to achieve true 1,200 x 1,200 dpi resolution and can print a B2 sheet in 1.3 seconds on standard coated and uncoated stocks with a maximum sheet size of 750 mm x 530 mm. The Jet Press 720 has the look and feel of an offset press with similar paper delivery and exit, yet offers the versatility and job handling of a digital device.

Fujifilm will be presented with its award at the 2012 Premiere Print Awards and InterTech Technology Awards Gala on October 7, 2012 in Chicago during the GRAPH EXPO 2012 exposition. Recipients will also be highlighted at the Printing Industries of America booth during the conference. 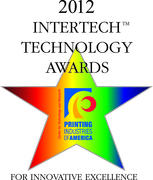