Civic Media of North Lakes, near Brisbane, has installed a second 5 metre wide Uvistar printer from Fujifilm, to handle an 82% increase in workload over the past 12 months. Managing Director Adam Middleton commented: “We are extremely busy and even with the addition of a second Uvistar, we have had to increase operations to 24/5.” 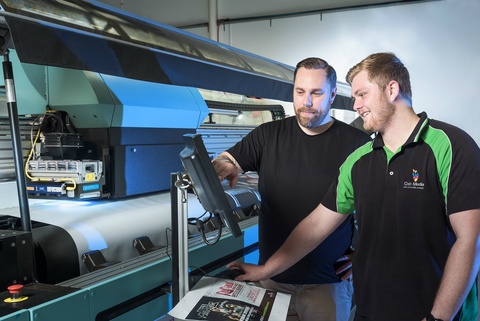 Civic Media is already using several Fujifilm-supplied roll and Flatbed UV printers including an Acuity Advance HS flatbed UV, the first 5 metre Uvistar UV roll-to-roll machine and an Acuity LED 1600. The showpiece is an Inca Onset Q40i UV installed in 2013, with a 3140mm x 1600mm bed and ability to produce up to 305 sqm/hr on rigid materials, at near-photographic quality. Fujifilm is the exclusive distributor of Inca Digital Printers, a Cambridgeshire, UK company.

On why Civic sticks with Fujifilm for wide and grand format, Middleton is unequivocal: “After using Fujifilm machinery and seeing how well they have looked after our account, we knew we could build on our relationship with them as we continue to grow as a business with them as our supplier.”

The new Uvistar, a Pro8 model, is mainly for printing large rolls of vinyl banner and banner mesh, such as that used to shroud construction site fences and scaffolding. 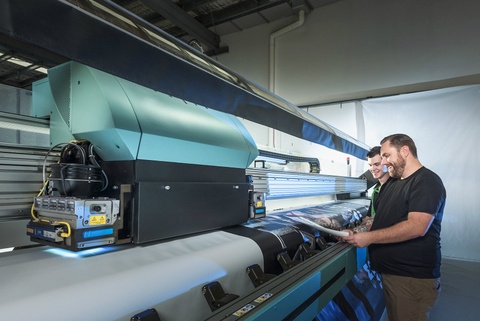 It features an array of 32 inkjet printheads delivering true 600dpi (up to 1200dpi apparent), and a wide-gamut inkset comprising CMYK, Lc, Lm and Lk which can be switched to CMYK only for high-speed billboard work at the flick of a switch. A unique feature called parallel drop size (PDS), enables both 40pl and 20pl droplets to be deposited in one pass, thereby delivering the benefits of grey-scale printheads without a sacrifice in productivity.

When printing 1600mm wide rolls, the Uvistar Pro8 can load up to three rolls side-by-side for astounding productivity – up to 350 sqm/hr. Roll loading/unloading is quick and simple. 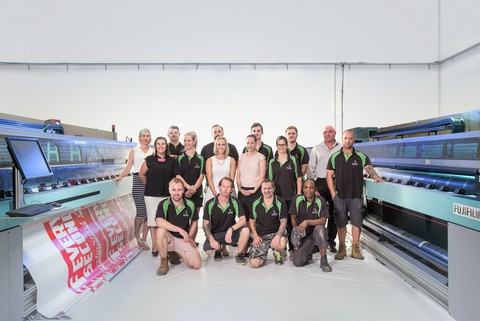 “The whole team is delighted to have another Uvistar on the floor,” says Middleton, “it’s taken up the extra workload straight away and we know we can depend on Fujifilm for support.”

Lindsay Barnes, Fujifilm Graphic Systems General Manager adds: “Civic Media is a showpiece of Fujifilm wide and grand format technology and we are privileged to be chosen yet again as Adam’s preferred supplier of this technology with the Uvistar Pro8. At drupa (Düsseldorf May 31-June 10) we will be releasing more new models, all powered by Uvijet inks. We invite all Australian visitors to call in and see us in Hall 8b, stand A25, right next to our sister company Fuji Xerox.”