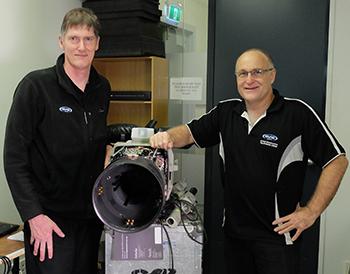 Founded in 2001, OSB uses the best technology to bring their clients’ OB vision to life and covers anything from live sport, entertainment programmes to special events. Recently the time came for OSB to have their entire fleet of Fujinon lenses serviced and repaired for which they turned to Fujifilm Australia.

OSB Engineering Manager Nick Haines explained, “We had several lenses which were suffering from too many years on the road in New Zealand’s typically harsh environment for the high quality electronics and mechanics of our Fujinon lenses. We discussed several options for circulating five lenses through the Sydney repair facility when Fujifilm Australia instead suggested assessing and repairing the lenses on site in our Auckland workshop. Not only would this save us considerable time and inconvenience but it would also give us the opportunity to upskill our technical staff as to what they could do to solve some of our minor issues and help in future decisions as to when we need to return a lens for service. We made the lenses available to be cycled through to Fujifilm Australia’s Senior Specialist Lens Technician Terry Kasai and set up a room with Terry’s equipment and a camera for final testing. We also had a wide angle and a 22x ENG lens that also required attention so Terry was able to use his many years of excellent knowledge and technical test equipment to identify and fix the issues. Many of the lenses’ issues came down to disassembly – quite a process to witness to this level - re-lubricating and cleaning out the guides for the lens carriers to run on. There were also a couple of electronic faults where Terry managed to identify the faulty components and arrange spares for us.

It really was a very efficient and effective process. The main advantage we gained is that time and risk were both significantly reduced. I didn’t have to ship the lenses to Australia, which is a minimum of two days each way and can easily slip to four days depending on our carrier. Time was also a big factor as effectively each lens was only out of service for one day, a more than reasonable amount of downtime that we could cope with. The tips and care suggestions from Terry will be a huge help in the future now he has now worked with our staff and understands our capability, skills and requirements. Time wise we achieved so much in a week which typically would have taken at least four or five weeks so all in all it was a great job extremely well done."