SYDNEY, 12 October 2018 – Last weekend saw Supercars and Foxtel air an Australian broadcast first with their Supercheap Auto Bathurst 1000 going out in 4K, making it the first sport in Australia to be televised at the ultra-high resolution. In a production involving 28 native 4K cameras deployed around the track, every lens used for the broadcast was a FUJINON 4K lens. 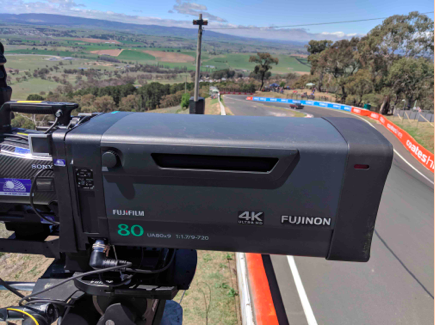 Supercars Media’s Nathan Prendengast explained, “Supercars Media was proud to utilise the FUJINON range of Lenses for the 2018 Supercheap Auto Bathurst 1000, delivering Australia’s first live sport broadcast in 4K. The arrangement for FUJINON to supply the glass was a collaborative effort between Gearhouse Broadcast and Supercars to ensure we had the best possible image quality. The huge variety of shots required to deliver the broadcast from 28 native 4K cameras meant we needed a variety of lenses options and FUJINON delivered. From the long range 107 to the wide angle on the job in the Hino Hub, FUJINON had a solution that worked for the broadcast. Even in the inclement weather of the first two days of broadcast we had no problems with the FUJINON lens range and they performed beautifully.”

FUJINON have a long and successful relationship with Gearhouse Broadcast having supplied the leading facilities provider with a wide range of lenses across their entire range.

Gearhouse’s Ben Quelch added, “Gearhouse and FUJIFILM have built a great relationship over the past few years which has seen Gearhouse Australia use the FUJINON UA107 as its go to box lens due to its market leading focal length and wide backend.”

Quelch added, “The FUJINON UA80 was used on a Sony HDC-4800 camera at the top of the mountain. The reason for this is that this lens with this camera provides the best quality when converting form the 4800 PL mount the lens B4 mount. Also, it’s fair to say this camera and lens combination produced stunning slo motion images.”

It what was a challenging shoot Supercars Media and Gearhouse needed the variety of lens lengths to cover every angle of the Mount Panorama Circuit from the famous Bathurst mountain at wide angle on jibs, to 107x for the long shots to the infamous Conrod Straight.

According to Prendengast nothing less that the best 4K images possible would have been acceptable. He concluded, “Clarity and sharpness of image was vital. FUJINON have a strong relationship Gearhouse Broadcast and we already utilise FUJINON lenses on the Supercars Championship. Bathurst was different and a whole new level due to the 4K broadcast. At the end of the day, we needed top quality images, using the very best 4K lenses and FUJINON stepped up and delivered handsomely.”

FUJIFILM Australia Pty Ltd is one of over 280 worldwide subsidiaries owned by FUJIFILM Holdings Corporation which is the world's largest photographic and imaging company, and one of the best-known and most instantly recognisable global brands.

FUJIFILM Holdings Corporation brings innovative solutions to a broad range of global industries by leveraging its depth of knowledge and fundamental technologies derived from photographic film. Its proprietary core technologies contribute to the fields of healthcare, graphic systems, highly functional materials, optical devices, digital imaging and document products. These products and services are based on its extensive portfolio of chemical, mechanical, optical, electronic and imaging technologies. For the year ended March 31, 2018, the company had global revenues of $23.0 billion, at an exchange rate of 106 yen to the dollar. Fujifilm is committed to responsible environmental stewardship and good corporate citizenship.